Walking and Talking with Andrew Smith

I’m excited to share the newest edition in my “Walking and Talking series” – the basic idea of the series it to interview authors I meet in my travels, and then draw short comics of our talks. This new one features one of my favorite YA writers, Andrew Smith. I loved hearing about his process, which is as different from mine as it’s possible to be, and was especially intrigued to find out that his novel Grasshopper Jungle actually began life as a comic!

“This happened in the summer of 2011,” he told me, “in America, we were going through this terrible economic crisis, almost a great Depression, and I saw it as a high school teacher, I saw students of mine who lost their homes, I saw students whose parents both lost their jobs, and students who had older brothers or fathers who were serving in Afghanistan – and I was thinking, what could possibly be darker than t 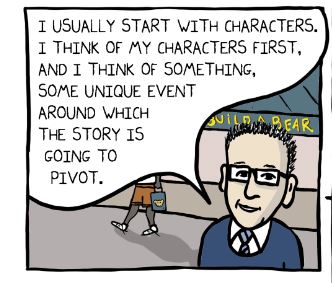 he United States of America in 2011? So I started this comic, and it was called Dystopia USA – and the characters in it were Austin and Robby and Shann, and it took place in this recession racked town in Iowa, and so I started drawing it and I thought, I’m putting so much time into this, and I really like the story, so I just stared writing the words instead.”