First Review of MOST DANGEROUS

This is the nervous time – my upcoming book, Most Dangerous: Daniel Ellsberg and the Secret History of the Vietnam War, is completely finished and advance copies are out there and we’re just waiting to hear what people think. So I was very excited to see that the first review, from Kirkus 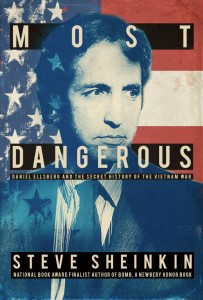 Following his award-winning World War II–era volumes Bomb (2012) and The Port Chicago 50 (2014), Sheinkin tells the sweeping saga of the Vietnam War and the man who blew the whistle on the government’s “secret war.”

From 1964 to 1971, Daniel Ellsberg went from nerdy analyst for the Rand Corp. to “the most dangerous man in America.” Initially a supporter of Cold War politics and the Vietnam War, he became disenchanted with the war and the lies presidents told to cover up the United States’ deepening involvement in the war. He helped to amass the Pentagon Papers—“seven thousand pages of documentary evidence of lying, by four presidents and their administrations over twenty-three years”—and then leaked them to the press, fueling public dissatisfaction with American foreign policy. Sheinkin ably juggles the complex war narrative with Ellsberg’s personal story, pointing out the deceits of presidents and tracing Ellsberg’s rise to action. It’s a challenging read but necessarily so given the scope of the study. As always, Sheinkin knows how to put the “story” in history with lively, detailed prose rooted in a tremendous amount of research, fully documented. An epilogue demonstrates how history repeats itself in the form of Edward Snowden.

« Fuse #8 TV: Steve Sheinkin
Another good review for MOST DANGEROUS »