The Story Behind The Port Chicago 50

I love a good detective story. Here’s an amazing one from the 1970s, the story of how a grad student named Robert Allen tracked down and uncovered the little-known history of a dramatic civil rights showdown at a naval base called Port Chicago, California, during World War II.

“This was the mid-1970s,” Robert remembers, “and I had moved from New York to San Francisco. I was working as a journalist, working on a story about some racial incidents that had happened on ships in the U.S. Navy. And in an archive, I came across this pamphlet entitled ‘Mutiny?’ And it had a picture of some black sailors on the front, and I picked it up and thought, ‘What’s this about?’ And the first sentence in there was, ‘Remember Port Chicago?’

“And I thought, ‘Port Chicago?’ Do they mean the port of Chicago? What is this?’ And I read it, and it told the story of a terrible disaster at Port Chicago, which is California, near San Francisco, a small port town, and there they had built a Navy base, an ammunition loading facility. And it turned out all the ammunition loaders were black, all the officers were white.”

The pamphlet, printed by the NAACP in 1945 told the Port Chicago story: the strict segregation in the Navy, the lack of training and unsafe working conditions for black sailors at Port Chicago, the disastrous explosion that killed more than 300, and the so-called mutiny—the refusal of fifty of the men to return to work under unfair and unsafe conditions.

“I was just amazed as I read this,” Robert says. He asked the archivist if he could make a photocopy, and was told he could just take one of the pamphlets; they had several. “So I took a copy, which I still have, and came home, read through It again, and went to the library right away, I thought, ‘Wow, let me check out a book on this.’ But there was nothing. I looked in the standard black history references, and it’s briefly mentioned in John Hope Franklin, one sentence, that’s it. But all of this had intrigued me, because clearly this was a huge story and nothing had been written about it.

“So I’m thinking, ‘I’m going to have to find some way to find out about this story,’ because by now I was really getting hooked. The explosion and this so-called mutiny, and then the whole thing just disappears from history.”

Robert read through the newspaper files at UC Berkeley, where he was a student, and found many stories about the Port Chicago explosion, and a few about the subsequent mutiny trial. “But just as quickly, it disappeared,” he recalls. “It’s the middle of a war, 1944, so there’s some dramatic news happening every day.”

Other work pushed Port Chicago aside for a while—but the story wouldn’t let him go. “This is really just a fantastic story,” he thought again and again, “how can I begin to learn more about it? What I need is something to start with.” He had the newspaper accounts, but they were brief, and often contradictory. “Then I thought, ‘There’s a trial. There’s a mutiny trial, and there must be a mutiny trial transcript. If could get hold of that, I might have access to the whole story.”

So he contacted the Navy the old fashioned way—he looked up the number and called them. He was lucky; the records had been declassified in 1972. No one had ever asked to see them.

“Yes, we have them here,” a young clerk told him.

“Do I have to come there to see them, or can I get a copy sent?”

“We can make you a copy if you know exactly what you want.”

“I want exactly the full transcript.”

He agreed to pay 10 cents a page for copies, no small sum to a broke student. “And that,” he says, “was the first big break.”

He got the transcript and started reading, taking notes. But the more he read, the more questions he had. “Because I now had the details of the events that happened, that the men had refused to go back to work. But nothing about what was going on at Port Chicago before that. The trial record was silent on that. And I realized that the reason for that was that this court had decided that any testimony about events prior to the date of the work-stoppage was irrelevant. The only question was, ‘Did you, or did you not, on August 9th, refuse to return to work loading ammunition?’ The court basically ruled out any testimony about the conditions existing at the base before the explosion. The discrimination, the lack of training, the fact that white officers were betting each other about which division could load the fastest—all of this, which contributed to the men’s anger and outrage, they weren’t allowed to tell any of it in court.”

As Robert read, he tried to see the story from the point of view of the accused mutineers, many of whom were teenagers. “What was it that motivated the men?” he wondered. “It’s never brought out in the trial. This is only half the story. Where’s the other half?”

The answer was that it didn’t exist. Not in any written record, anyway. “And I realized,” he says, “the only way to get it was to find some of the survivors and interview them, especially the fifty, the ones who were involved in the mutiny. And that struck me as a very daunting task.” He looked for the names of the defendants in Bay Area phone books, and made a few calls. No luck.

“Well, how am I going to find these guys? Well, who would have information about them? The Navy personnel department.” So he wrote to the Navy, asking for addresses.

The reply: “We cannot release these addresses to you. These records are confidential.” 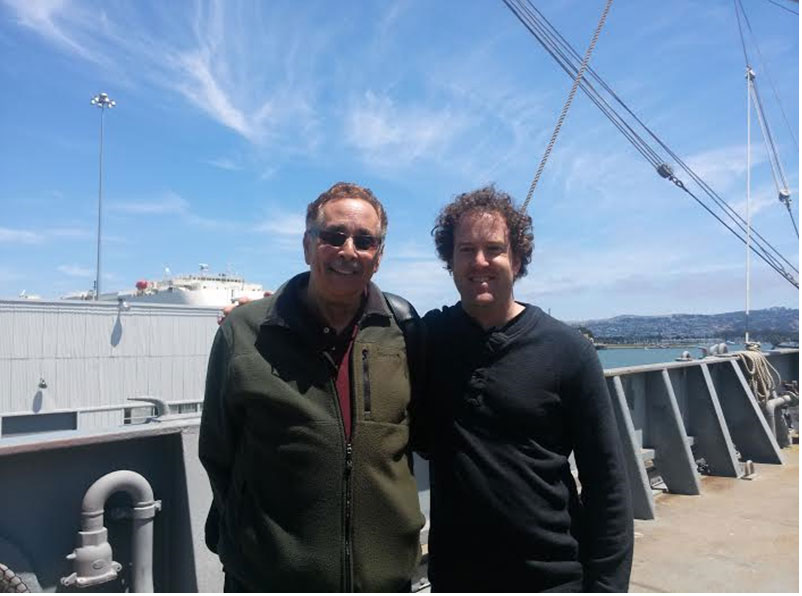 With Robert Allen in California, 2014

Robert’s hopes sank as he read. Without the slightest clue as to where the men lived, how he could he begin to find them? But at the bottom of the letter was something surprising. Whoever wrote it had clearly broken from form-letter-speak to make a suggestion: Robert could write letters to the men and send them to the Navy, along with self-addressed stamped envelopes. The Navy would forward the letters, and if the men felt like responding to Robert, they would.

This was the turning point. “I got these packets together and sent them out,” he remembers.

There was a long silence after that, and Robert began to doubt he would get any responses. “I’ll never know if the Navy mailed the letters or not,” he thought. “They could have been all thrown in the trash.”

But finally, a letter came. Then a few more. Robert was thrilled. He talked to several of the men on the phone, including Joe Small, the man the Navy accused of being the ringleader of the Port Chicago munity. It wasn’t easy. “Because for these men, who was I? What was my motive? That’s on everybody’s mind, whether they say it or not, so you have to speak to that.”

He explained what he was trying to do. “Your perspective is missing from the written record,” he told the men. “The story of you and the other sailors, and what was happening in the years, weeks, days before the explosion, that’s not in the written history of Port Chicago. And I want to get your story out.”

Man of the men agreed to talk, and Robert was determined to do it in person. “I learned as journalist, face to face contact is always better,” he says. “You get much more from somebody if you talk to them face to face.”

But that raised a new problem. “I looked at the list of addresses, and every single one of them was along the East Coast and on down into the South. And I thought, ‘How in the world and I going to do this?’ I was in graduate school, and graduate students, by definition are poor. So I really didn’t have any money to make a big trip, but then, reading the newspaper, I saw a Greyhound Bus ad, they had what they called the ‘See America’ fare. You paid $100 and you could ride any Greyhound Bus anywhere they went in the United States for a month. And I realized, that was my ticket.”

Robert flew a redeye to New York City. He had a list of men to interview. The first lived in Harlem. It was nearly the last.

“The very first interview practically stopped me in my tracks,” he says. “I went to the man’s building in Harlem, and he opens the door and he says, ‘We can do the interview, but let’s go down the street to my friend’s house.’”

Sure, Robert said, thinking, “This is his interview, and if I want to get it, I have to do it on his terms.” The walked to a neighbor’s apartment and went in. There was no one home. They sat and talked for over an hour. Robert could sense the man relaxing as the interview went on. “But what had happened at his front door was still hanging over me,” he says. When they were done, Robert decided to ask about it.

“I hope I didn’t create a problem for you,” Robert said.

“No, you didn’t create a problem,” the man said, “but my son was home today, my grown son. And if you had come in, I would have had to introduce you, and I didn’t want to do that. Because I’ve never told him what happened to me at Port Chicago. And I’m still not sure I want him to know.”

Robert was stunned. “I hadn’t really thought about how the families might be affected by what had happened, and how that might create pain all these years later.”

He walked to a Y and got a room. It was a rough night. “If he hasn’t told his son, what does that mean about how he feels about it?” Robert wondered. “If the men haven’t told their families, what right do I have to be asking these questions? Am I not re-traumatizing them by even asking the questions? I should just get on the bus and go home. Even if the men agree to be interviewed by me, can I really do it? Do I have a right to do it?”

One sleepless night later, he still hadn’t made up his mind. His conscience was telling him to get on a plane and fly home. But he had already bought the bus ticket. And the next person was nearby, in northern Jersey.

“I should do the next interview,” he decided. “I should at least do one more.”

And the next interview was Joe Small. “Thank goodness!” Robert says, laughing. “If it had been a couple of others who came later, I would have said, ‘No, I shouldn’t be doing this.’ Joe Small, when I got to talk to him, he was ready to talk. His wife was there, she knew the story. His response was, ‘I want to get the story out.’”

And the rest is history. History that literally would not exist—not in any form accessible to us today—without Robert Allen’s amazing detective work. All fifty of the men convicted of mutiny at Port Chicago are gone. But their voices live in Robert’s interviews. Their story is very much alive.

« Walking and Talking with Jennifer Holm
Interviews with NBA Finalists »