One of the best things about my job is that when I do speaking events, people almost always come up to me and tell me about family connections to one of the stories I’ve written about. This is especially true since Bomb came out – about 200,000 people worked on the Manhattan Project, so it makes sense that they’d now have descendants all over the country. I’ve also met more than a few folks who insist they are related to Benedict and Peggy Arnold!

This week, at a visit to the Darlington School in Rome, Georgia, two Korean War vets told me an amazing story about their own close brush with history. This goes back to early 1953. One of the men, Frank Barron, was a young officer aboard a destroyer, the USS Eversole. They received urgent orders to sail for Guam and escort an ammunition ship, the USS Chara, from Guam to the American base in Yokosuka, Japan. Barron’s ship met the Chara, and they set out for Japan.

“The standard procedure,” Barron recalls, “was to be stationed 2,000 yards directly ahead of the ship which was being protected, theoretically from submarines.” They sailed in this formation for a full day and night. Then, suddenly and without explanation, the Eversole was ordered to move 40 miles ahead of the Chara. This seemed very strange to Barron. Why were they to suddenly abandon the ship they were protecting? The orders were clear, though. The Eversole cruised ahead. “Within a few hours the order came back to resume normal steaming and course,” Barron says. “Everyone on the ship was really curious what that was all about.”

And Barron remained curious – for over 60 years.

In the spring of 2014, at a farmers market in Rome, Georgia, Barron ran into Buddy Andrews, a man he’d known since their school days in Rome. They got to talking over old times, including their military service. Incredibly, it turns out that Andrews, also a young naval officer in 1953, had been a crewmember aboard the Chara at the time of the mysterious incident in the Pacific. Barron and Andrews started comparing stories, and, finally, Barron was able to piece together exactly what had happened.

In one of the holds of Buddy Andrews’ ammunition ship was an atomic bomb. The Chara had been ordered to deliver the bomb to Japan. President Eisenhower had just taken office. He had vowed to end the Korean War, but was stuck in contentious negotiations with China and North Korea. The bomb, Barron and Andrews believe, was meant to be influence those talks. And it may well have; an agreement ending the war was signed soon after.

Barron also learned that, during the trip to Japan, a crewmember aboard the Chara had carelessly tossed a cigarette into a bucket filled with oil-soaked rags. A fire started to spread. This explains why the Evesole was ordered to speed away – the idea was to get to a safe distance in case the bomb aboard the Chara was accidentally ignited. Luckily the fire was extinguished, and that’s when Barron’s ship was told to resume its normal position in front of the Chara. 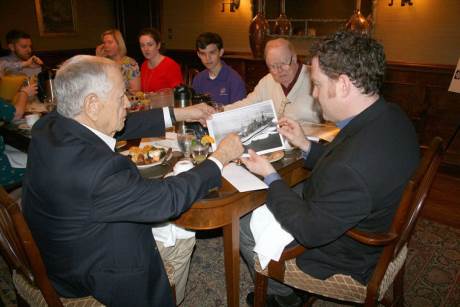 “Well, that’s the story,” Barron told me, “and it was interesting tidbit from the Korean War.” Yet another reason why I love my job.